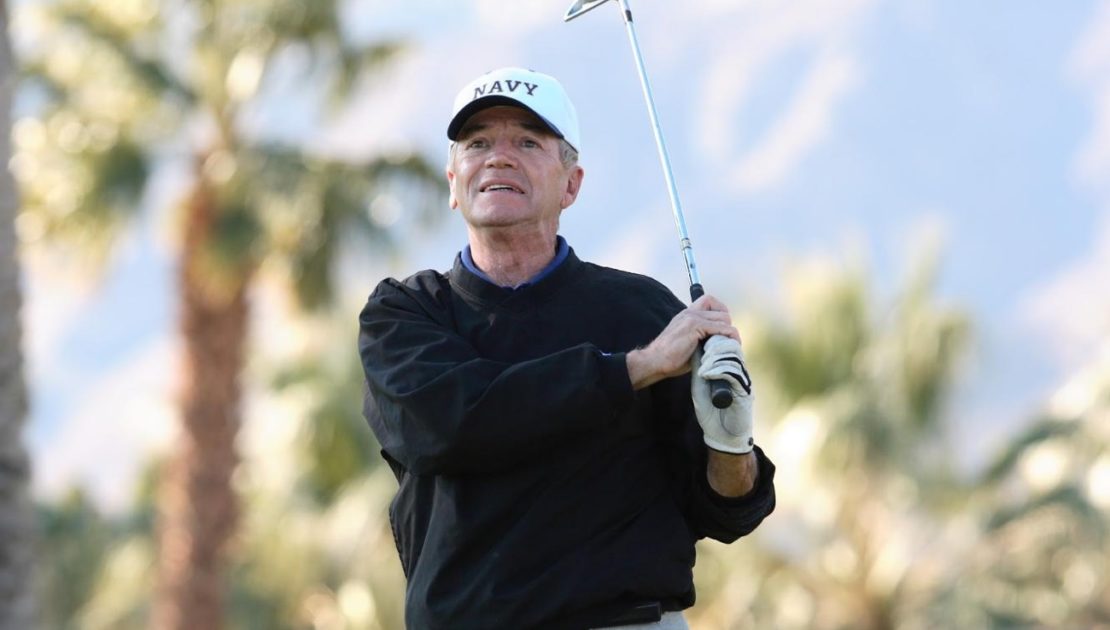 Here are the stats on comedian Tom Dreesen: 61 ‘Tonight Shows’ with Johnny Carson, 50 ‘Late Nights’ with David Letterman, over 500 total national television appearances, and at 76 he’s still working 50 weeks a year. When he isn’t playing golf. Handicap: 7. Name a celebrity, he’s played golf with them.  Started caddying at 11 in Harvey, Illinois “for seventy five cents a round, sometimes you’d get a dollar.” But a stint in the Navy kept him away from golf until he got funny.

Golfoholics: What got you back into the game?

Tom Dreesen:  I started touring with Sammy Davis Jr. He had a golf cart that you could live in. It looked like an apartment you know? Television in it. It had a bar. It just had everything and I would go out with him and ride around in the cart. He liked playing a lot of golf and one day I took one of his clubs and I was swinging it. and he said, ‘You got a nice swing.’”

GLF: We have Sammy to thank, or blame.

TD: (laughs) Yes. And then in 1977 Bob Hope invites me to the Bob Hope Classic. Now Sammy had Pings, they were one of his sponsors. So I came in my dressing room one night, we were performing in Phoenix and there was a brand new set of Ping woods and irons with my name on the bag. So I went to my first Bob Hope Classic. There was like 3000 people lining the fairways and the announcer goes ’On the tee, comedian Tom Dreesen’ and my knees started to shake something terrible and holy shit, you know? I said to myself, ‘I’m going to start working on my game.’ Because I damn near killed a guy in the gallery on the right hand side.

GLF: Do you remember what you shot that day?

TD: No, because you could pick up. You had partners, the pro and amateurs with you. I’ll tell you a great story. One tournament I’m playing with Arnold Palmer. We became lifelong friends. But that day there’s also two amateurs in a group and one other celebrity. That’s me. I get to the first tee. There’s a guy who was a big car dealer from Detroit. He had like 22 car dealerships throughout Michigan. So I walk up to and he introduces himself. And I said, ‘Hi, I’m Tom Dreesen.’ He said, ‘Nice to meet you.’ And then he says ‘I sure hope we get a good celebrity. Last year we get some guy I never heard of.’

GLF: (laughs) I know you worked with Sinatra for years, did he play?

TD:  Frank was the worst golfer. He was a perfectionist and the game frustrated him way too much. One of the most impatient men I’ve ever met. And never late. He said, ‘Tommy, if a guy tells you to be at his office at 9:15 and you show up at 9:30, you just told him your time is more important than his. So he was an impatient man. He paced before every show.

GLF: What about the rest of the Rat Pack?

TD: Well besides Sammy, Dean (Martin) was a wonderful, wonderful guy and a good golfer.

GLF: Tom there’s so much more to talk about with you. How about we check in from time to time and you tell us more golf stories, maybe a joke or two.

GLF:  Before you go, any regrets?

TD: No regrets, but you know, I made a couple mistakes. I toured with Frank Sinatra for 13 years, and I turned down more sitcoms than most comedians get offered in a lifetime. But I can’t call it a regret because I was doing it with this living legend who I loved.